RAUKUMARA 2019 is a continuation of Sarah Munro’s ongoing ‘Trade Items’ series that is focused specifically on the Raukumara Ranges on the East Cape of the North Island of Aotearoa. The narrative within the work centres around the history of introduced species in the area, and their effect on the environment. The body of work sets out to draw attention to the interconnected and interdependent nature of Aotearoa’s endemic species. It points to the significance of balance in our ecosystem and the consequences for our environment if this balance is disrupted. The consequences for the Raukumara Ranges and the surrounding area in 2019 can be described as an environmental crisis. Deer, possum, and erosion have resulted in wide spread endemic flora and fauna species loss throughout the East Cape forests, streams, and rivers. The near total catchment collapse above the Waiapu River causes an unprecedented volume of smothering sediment to wash downstream and out into the surrounding coastal waters. If the high introduced animal numbers remain unchecked this 700,000ha forest could be lost.

The impetus for the focus of this work came from a long-standing interest and respect for the work, research and tireless environmental advocacy of Graeme Atkins. The accuracy and emphasis of the species groupings has been guided in consultation with Graeme. As has the selection and content of the writing below. Late last century the Raukumara Ranges were considered one of the few remaining examples of intact New Zealand bush. Graeme Atkins has worked for the New Zealand Department of Conservation for the past 25 years and during that time he has “witnessed the Raukumara brought to her knees.”

Note: Sarah Munro‘s ‘Trade Items’ series is based on a watercolour by Tupaia, high priest and master navigator from the island of Ra’iātea, who guided Lieutenant James Cook on the HM Bark Endeavour, across the Pacific Ocean to New Zealand. Tupaia’s drawing documents a instance of ‘first contact’; a trade that occurred in Tolaga Bay in the early weeks of Cook’s first survey of Aotearoa. Draw in 1769 the drawing depicts the trade of a large crayfish for a length if cloth. Employing the use of repetition and substitution Munro’s series of embroideries, euphemistically titled ‘Trade Items’, are not historically accurate illustrations but rather contemplations in cloth and thread of the ongoing repercussions of the exchange recorded in Tupaia’s watercolour. 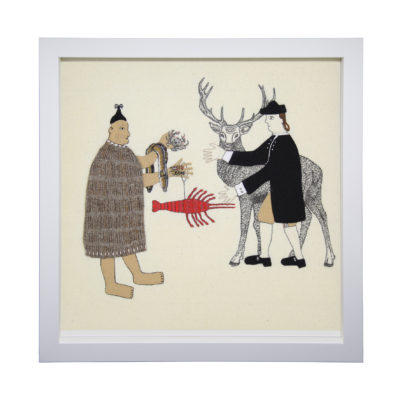 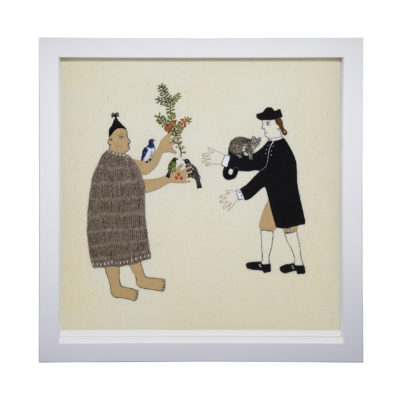 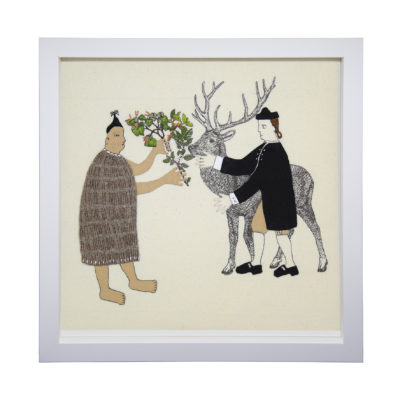 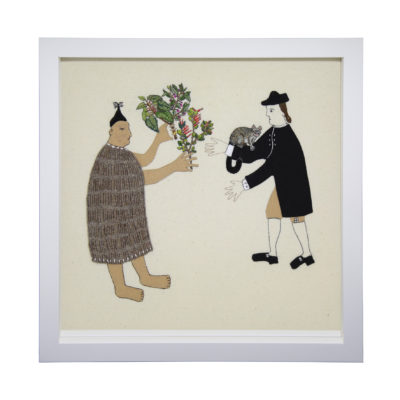 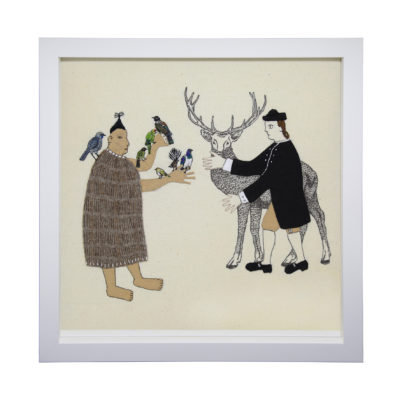 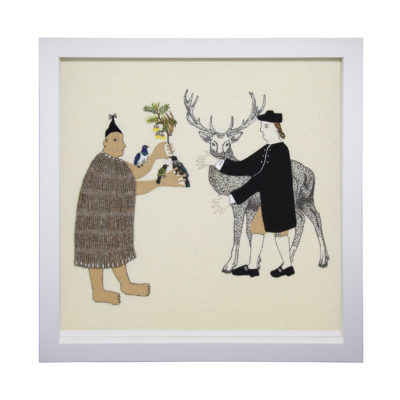 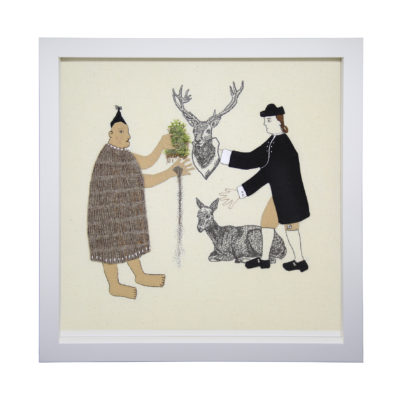 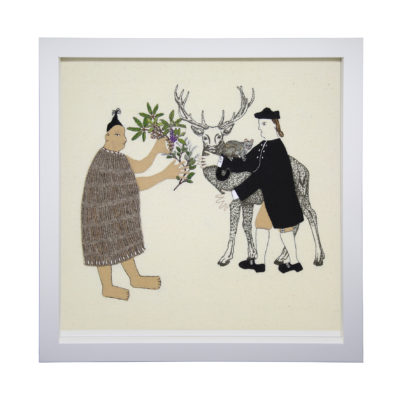 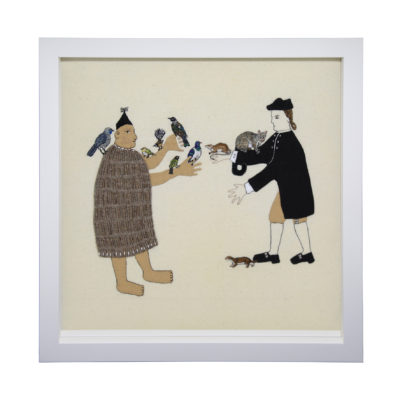 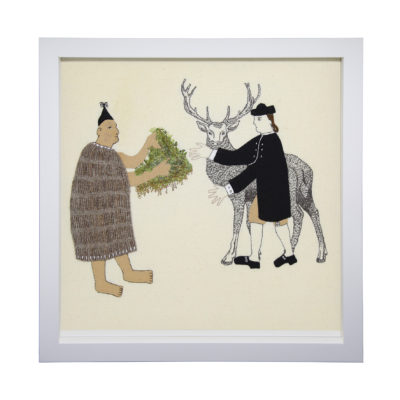 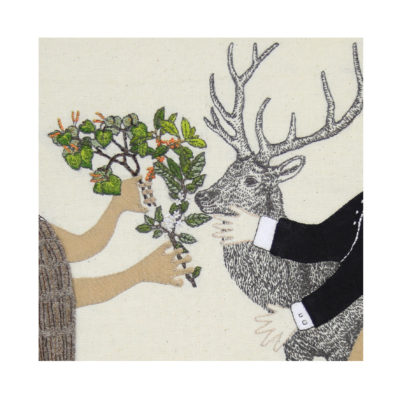 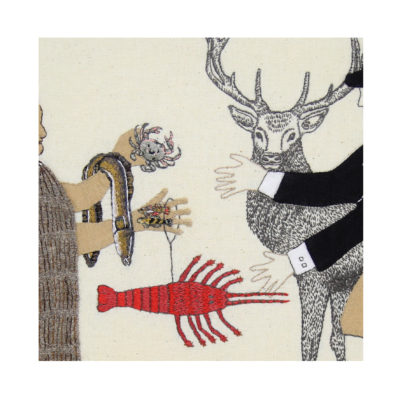 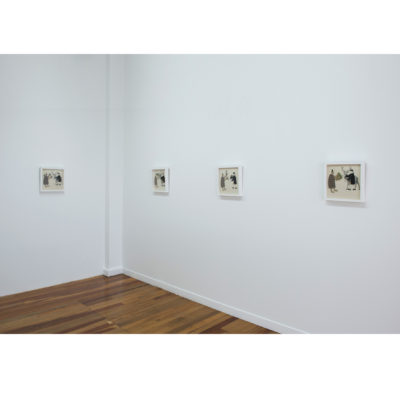 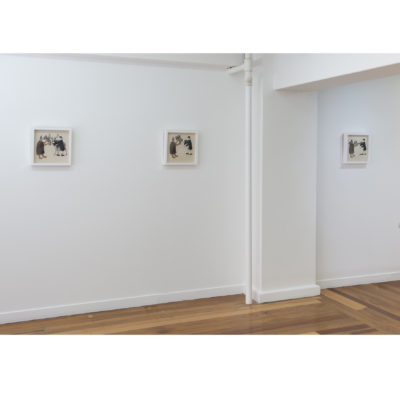 Understorey
In Aotearoa a healthy understorey, the trees and shrubs between the forest canopy and the ground cover, should be so dense it’s like a wall of vegetation making it difficult to see far into the bush. In large areas of the Raukumara Ranges the bare floor under the larger trees now resembles what one might find in monocrop pine forest with the most abundant items on the ground the countless possum and deer droppings. The impact of deer and possum is severe and obvious with almost a complete absence of important understorey species that are critical to the balance of the bush ecosystem and on which a range of native species depend.

Deer
30 years ago deer were a novelty in the Raukumara area and local anecdotal reports suggest it was the commercial forestry block managers of late 80’s that deliberately introduced deer into the ranges for the purpose of recreational hunting. The deer established themselves and their population rapidly increased to match the abundant food source. Now the Raukumara is overburdened. Extensive ring-barking by deer can be seen throughout this massive forest suggesting that the deer population is hungry. Reportedly 10-20 years ago the deer in the Raukumara were fat. Now, having stripped and consumed the bush understorey, they are undernourished, coming closer to towns seeking food.

Possum
A Possum can eat up to 300g of foliage a day. The growth and life-cycle of a tree or plant is significantly affected when all parts of it are eaten. Left unimpeded one possum can do so much damage that a tree cannot recover. Research shows that a single possum, going back nightly to a Totara can do enough damage to kill one of these ancient tree within 3 years. There are thousands of dead Totara in the Raukumara Ranges and possums have killed nearly all of these trees. Holes in the canopy left by a graveyard of these centuries old Totara allows excess sunlight through, drying out the land beneath leaving it vulnerable to erosion and slips. In high animal numbers possum pose a significant threat to a forest, even one the size of the Raukumara.

As well as killing the trees possum compete with native birds and reptiles for their food sources. Possums are opportunistic omnivores. They are known to eat the eggs and chicks of nesting birds, invertebrates, native gecko and the large native land snails. Leaves are the main part of their diet, but they also eat buds, flowers, fruit/berries and nectar of the legendary berry loaded trees like kawakawa, putaputaweta, mahoe and makomako. The decline of native mistletoe and kotukutuku is considered mainly due to possum. The flowers of the kotukutuku (native fuchsia) are a favourite food of tui, korimako (bellbird) and tauhou (silvereye). Within the forest ecosystem these flowering berry trees don’t all fruit at the same time. There is an overlap of the flowering and fruiting period that keeps native birds in food supply all year around. Without a food supply there are no birds in the Raukumara.

Dawn Chorus
A combination of high predator numbers, and the resulting competition for food between endemic and introduced species means that the Raukumara Ranges can no longer support a dense and diverse population of native birdlife. Possum, rats and stoats seek out nesting birds, and indiscriminately eat their eggs and their young. An unchecked soaring population of both deer and possum consume the trees and plants, particularly the understorey, upon whose nectar, berries and seed native birds feed year round.

Gentleman botanist Joseph Banks journal entry of 17 January 1770 describes the dawn chorus as “the [most] melodious wild music I have ever heard”. In the 700,000ha of forest of the Raukumara Ranges birdsong should be deafening, rich and raucous but instead there is deathly silence. In 2019 it is reported that there has been no Dawn Chorus in the Raukumara for more than 5 years.

Kowhai
When Cook made landfall at Tūranganui-a-Kiwa (Poverty Bay) in October 1769, kowhai would have been in full flower. Kowhai specimen and seed were collected by Banks and Solander. Kowhai appear in Banks Florilegium, sketched originally by Sydney Parkinson, the botanical illustrator thought likely to have supplied Tupaia with the materials used for his drawings. Tui and korimako/bellbird are primary pollinators for kowhai. The curve and length of the flower and the tui’s bill is a good match. In the Raukumara in October 2019 kowhai still flower but there are no longer native birds to pollinate them.

Moss, filmy ferns, lichen, liverworts, native orchid and other delicates
In healthy cold water rainforest like the Raukumara a thick carpet of moss should be present covering the ground beneath the trees. In places a person should be able sink into this moss layer up to their knees, or higher. The moss acts as the rainforests water management system. During the wet months it controls run-off, soaking up and holding the rainwater so that it can be slowly released during the dry months. This carpet helps hold the topsoil to the steep mountainous ranges. The moss and humus layer is extremely fertile nourishing the root systems of small filmy ferns, lichen, liverworts, native orchid and other delicates. It is also covered in countless seedlings destined to be the next generation of the rain forest.

Until recent decades this moss layer has had nothing stand on it heavier than a kiwi, kakapo or turkey sized bush moa. The sharp hooves of deer slice open the moss layer leaving it vulnerable to the heavy rainfall the Raukumara attracts. The moss, soil and all that is living on it are washed away. In a 700,000ha catchment such as the Raukumara Ranges the degradation of this mossy ground cover contributes significantly to the catastrophic levels of erosion that flow downhill into the streams and riverbeds like a deadly smothering blanket.

Erosion
The Waiapu River is formed by the joining of the Mata and Tapuaeroa Rivers, which originate in the headwaters of the steep Raukumara Ranges. The catchment is highly degraded with serious and extensive erosion and is on the verge of total catchment collapse. The Waiapu River and its damaged catchment now has the highest sediment load of any river in Aotearoa at 36 million tonnes per annum, also making it one of the highest in the world. Throughout its many tributaries sediment blocks sunlight so that nothing can grow, acting like a ‘bucket on a lawn’. It disrupts fish migration and suffocates freshwater fish species. Seven truck trailer loads of sediment per minute (or a tonne per second) collects and flows out of the river mouth into the sea, burying reefs that have provided kaimoana for generations.

A combination of events and conditions has led to this environmental crisis. In return for service, returning WW1 serviceman (pakeha) were offered blocks of land and given the opportunity to settle ‘farms of their own’. Steep land blocks in the Raukumara area were marginal farming land. In pursuit of pastoralisation these new land owners were given an allotted amount of time to break-in the land. Penalties were given for trees left standing. Drought in 1983 was followed by ‘Rogernomics’ and saw the removal of the government farming subsidy in 1985. This meant that farmers now carried the full price of farming this difficult land. In 1988 Cyclone Bola saw a large percentage of pasture loss and commercial forestry entered the area as farmers sold off their land.

The soft sedimentary rock of this steep geologically young landscape is highly susceptible to erosion and inappropriate for clearfelling and monocultural commercial forestry. A forest of endemic tree species has higher tensile root strength than monocrop pine forest. High rainfall, loss of the understorey, the degradation of the forests mossy ground cover and constant animal browsing of any new seedlings that manage to sprout and take hold keep erosion site bare.

“Do you also see a land ravaged by the impact of introduced ideologies; Imperial, colonial, racist and economic” (Natalie Robertson, Through New Eyes, EDS 2019 Conference: 14-15 August 2019, Session 9 – The future of the East Cape. @11:56min)